Ethereum price has seen a massive uptrend due to the upcoming software update of the underlying blockchain called “Merge”. This upgrade will allow it to move from Proof of Work (PoW) to Proof of Stake (PoS).

The first is energy-intensive and therefore not environmentally friendly, but the second does not use mining devices and therefore reduces its carbon footprint multiple times.

Is the merger bullish?

Now that we have a basic understanding of what a merger is, let’s take a closer look at how it affects the blockchain and its users. The general population believe that the merger will increase the speed of transactions, reduce gas fees and triple revenue through staking, etc.

This expectation, coupled with the narrative of the triple halving, has caused Ethereum’s price to skyrocket despite being in a noticeable bear market. ETH, in particular, has more than doubled as it rose 130% between June 18 and August 14.

However, the Ethereum Foundation has published a blog, addressing these misconceptions and clearly stating –

Either way, speculators managed to trigger a wild rally for Ethereum price. Let’s take a look at the technicals and whether these gains are sustainable in a bear market.

After this impressive uptrend, Ethereum price seems to have taken a huge hit, indicating the start of a second leg.

This development shows that the bears are currently under control and that the ongoing recovery bounce is just a failed bullish attempt. The logical step is to prepare for the incoming downtrend and identify a perfect entry to open short positions.

The fair value gap (FVG), aka price inefficiency, stretching from $1,726 to $1,823 is the ideal entry zone, but close examination reveals that $1,730 is a strong resistance level. . This confluence makes $1,730 a great place to start accumulating short positions. 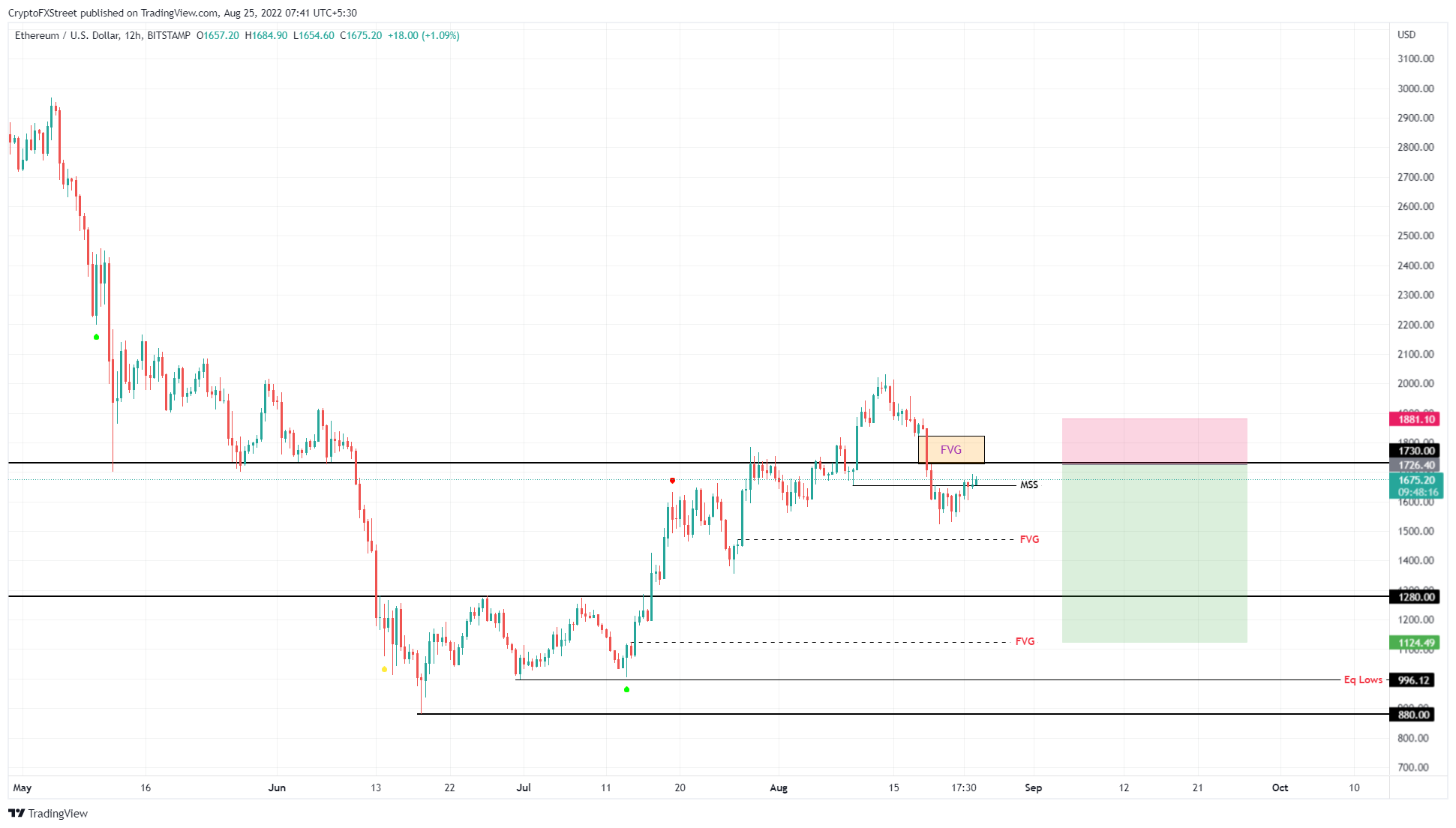 However, a riskier play is to hedge only 50% of the shorts and hold the rest to see if ETH can produce a lower from the June 18 low at $880. If successful, this development will indicate that a more pronounced correction awaits the smart contract token.

In such a case, market participants may begin to re-accumulate short positions around the psychological $1,000 level, with the expectation of a potential crash to $600.

From a macro perspective, Ethereum price created a volume gap, ranging from $960 to $383. The volume profile also shows that $755 and $591 could help absorb selling pressure and potentially allow for macro basing formation here. 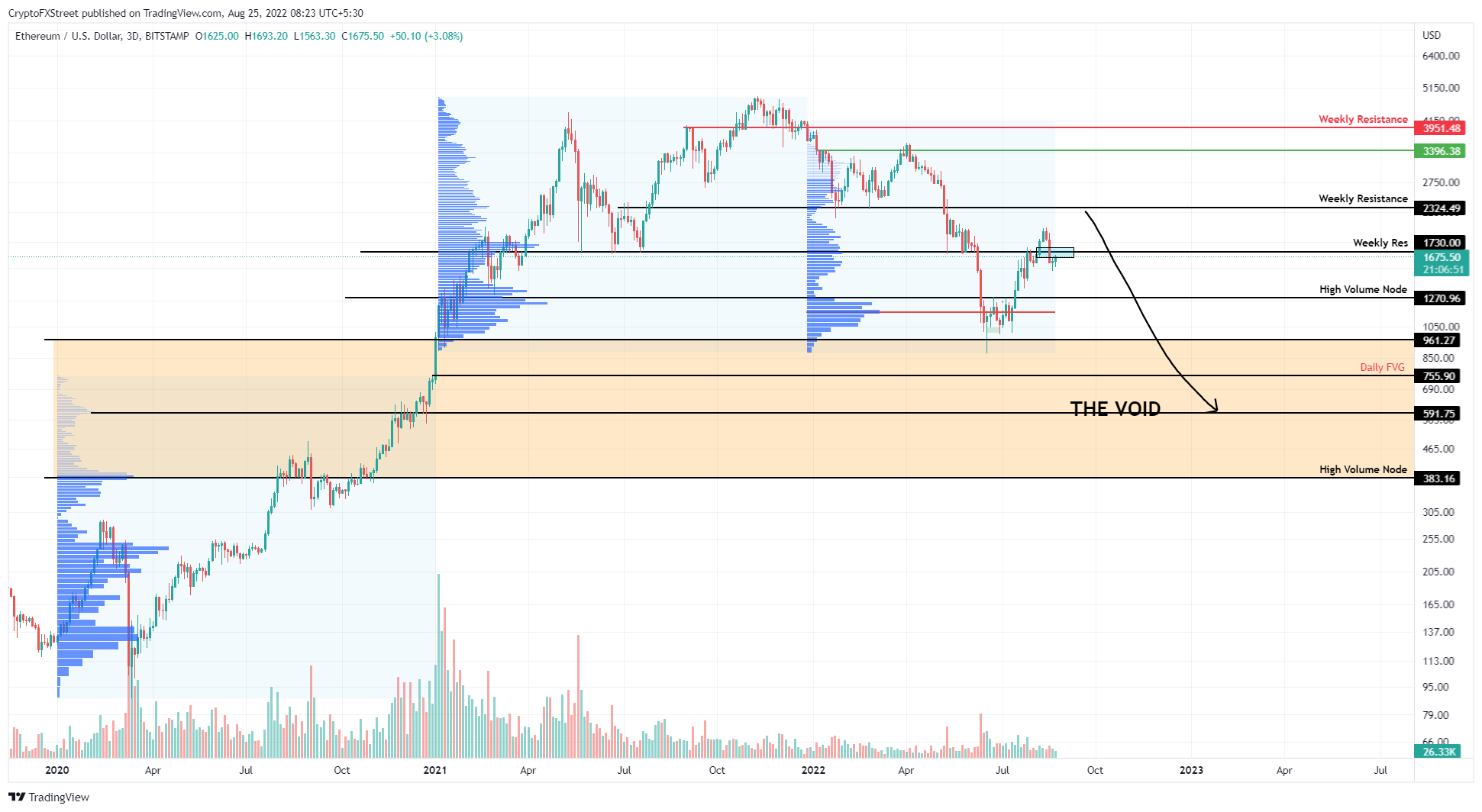 While the thesis above makes sense from a logical standpoint, the merger is a significant event from a historical standpoint, and this shift from PoW to PoS signifies an inherent change to the Ethereum blockchain like never before. .

Therefore, despite the data supporting a sell-off, the hype could instead trigger a surge. If this move produces a higher high above the August 18 swing high at $1,881, it will indicate the first rift in the bears’ armor.

However, a 12-hour candlestick closing above $1,957 will create a higher high and invalidate the bearish thesis for Ethereum price.

While the macro or long-term outlook is bearish, the video below explains how to capitalize on the recovery rally taking place in a much shorter time frame.